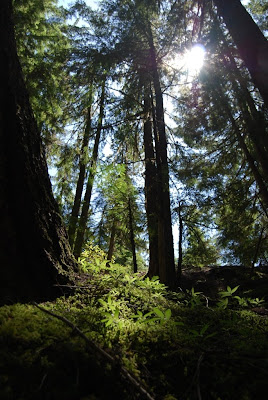 My eyes flared open, I rolled over to look at the time on my phone. 6:34 AM. I groaned inwardly at the light flooding through the translucent curtains in my dorm room and put a pillow over my head, vainly hoping to shut out the light and fall back asleep. Instead of dozing, I calculated exactly how much sleep I had managed to get – about 5 and a half hours. I thought of a Men's Health article I read in an effort to distract myself from realizing that I was running on an elliptical machine at the gym the other day which informed me that in order to lose weight, prolong my life, and maintain my immune system's strength among other things I needed to make sure I get 8 hours of sleep a night. Catastrophic sequences in my frenzied mind fired off from there, and, irate at my inability to quiet my mind, I desperately endeavored to meditate in the hopes that I would drift into dreamland. I eventually gave up, and dragged myself to the gym to get the day started.

On the way to the gym, I chatted with the Marlboro Bookstore shopkeep, and we complained about the chilly, wet weather that has plagued us so much of the summer. She worried that winter would be unbearable. I silently thanked the heavens I wouldn't be here for it and hopped on the elliptical.

The day continued with a rehearsal in the concert hall of the Britten that I will be performing with my friend, Sivan, this weekend, and being in the hall, we recorded our rehearsal. The knowledge that the devilish imps that microphones are were hanging at the front of the stage set off the tiny, yet oh-so-potent critical demons off in my mind. A veritable peanut gallery of bitchiness distracting me from the task at hand – to sing seven minutes of T.S. Eliot poetry.

By the time I got to lunch, I could barely bring myself to enter the table's conversation, my temples throbbing, and my neck and back stiff and whining. I left to try to lie down for a bit before my next rehearsal, but again sleep eluded me.

I arrived just in time for a rehearsal of a Bach aria with Lydia and Yvonne, and we kicked off the rehearsal complaining about a variety of kvetches: the cold weather, the dryness, how tired we were, the fact that everyone is getting sick, the toilet that was plugged for an entire day in my dorm, the acoustic in the rehearsal room in the Presser building, the price of lip balm. About 10 minutes into the rehearsal, there was a moment of silence, and Yvonne began to play. Lydia joined her, gently improvising a flowing continuo line to accompany her, and we were off. Melodies and counter-melodies flowed together and then apart. Yvonne and I handed off phrases to each other, Lydia guiding us harmonically the whole way with the figured bass in her part. We were so exhausted, the music just poured out of us – we didn't have the energy to get in the way. Yvonne and Lydia approached and then played the final cadence, and there was silence. We could hear the wind rustling through the leaves outside, and we looked at each other. It felt as though a peaceful, profound, and deep contentment had taken us over without us even realizing it. Nothing else mattered, and, somehow, we were happy.

A few weeks ago, I was standing in front of the Atlanta Symphony at their first rehearsal in their summer home, the Verizon Wireless Amphitheater at Encore Park, listening to the winds trade off the opening themes of Ecco ridente in cielo from The Barber of Seville, while sweat dripped down the sides of my face. As I took in my first breath to sing the opening lines, I felt my heart racing in my chest, and I realized that my perspiration was not only due to the sweltering heat.

The first time I sang the Count in Barber was in 2003, at the end of a pressure-filled, intense, and mind-blowing summer. I had just finished my first year in the HGO Studio, and earlier that summer had competed in the BBC Cardiff Singer of the World competition, sung my very first Carmina Burana with the National Symphony, and was experiencing my first summer as a Wolf Trap Filene Artist. By the time my first rehearsal for Barber came round towards the end of the summer, I was beginning to feel myself crack under the pressure of all of the incredible opportunities that had come my way in those months. The Count was the most difficult role I had ever encountered up until that point, and that summer at Wolf Trap would be the first time I ever performed a leading operatic role in a professional situation. It was also the second time I ever performed any Rossini in public for a paying audience. Warming up for that first rehearsal at Wolf Trap, I started to wonder if my voice was pretty enough. Would I be able to sing as fast as I wanted? Would my high notes come out? What if the conductor hated me? What if I didn't get along with the director? Did my colleagues all think that I sucked? My inner dialogue was creatively catastrophic as my worries and nerves overwhelmed my logical mind. By the time I opened my mouth to sing the first notes of my aria, I was convinced that I was going to be fired for my substandard-ness.

Midway through rehearsal, I realized that I could not live the rest of my life with that kind of neurotic drama going on in my head. It made it almost impossible to sing and sucked any sort of enjoyment I got out of making music. I resolved myself to finding some help when I got back to Houston, and the minute I got home after rehearsal, I bought a copy of The Artist's Way and have done morning pages almost every day since then.

Back in my Atlanta hotel, trying to relax and unwind after our rehearsal, I remarked on the phone to a friend that The Barber of Seville sent me into therapy. While I said that somewhat jokingly, it held a lot of truth. Barber forced me to change the way I approached music. It was, until that point, the first time I felt so much terror of performing that I wasn't sure if I would be able to pull it off. It was the first time I had ever questioned myself so profoundly that I wondered if I was cut out for a career in music. Facing that again for the first time in six years in Atlanta, I was quite vividly reminded from whence I came.

Putting on a brave face, I feigned calmness and nonchalance the day of the concert, but inside, I felt as if I were right back where I had been all those summers ago at Wolf Trap, questioning myself and my ability to negotiate Rossini's virtuosic and naked musical terrain. But this time, as I warmed up for the concert, all the work I had done dealing with my nerves the past six years started to seep in, and I found my nerves and self-doubt turning into adrenaline that was fuel for my focus. Midway through the aria, the first piece I sang on the concert, I realized that everything was going just fine, and that it was, in fact, fun. I felt myself relax, and I began to enjoy the summer night and getting to entertain the people who had braved the heat and humidity to hear this fun, lighthearted music. 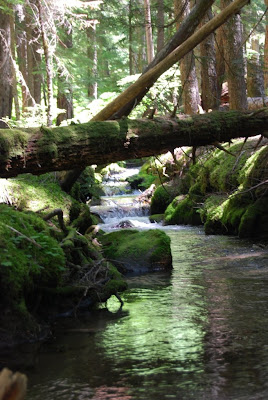 Before the simple intensity of Marlboro began this week, I carved out a couple of days of vacation for myself to visit one of my best friends for a fun and adventurous weekend in Portland. 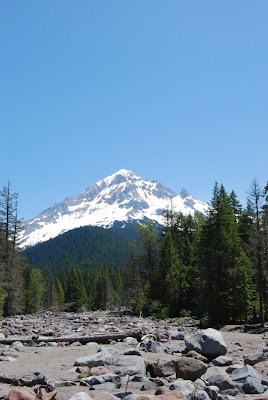 The weather was phenomenal, so we took every advantage to be outside that we could. 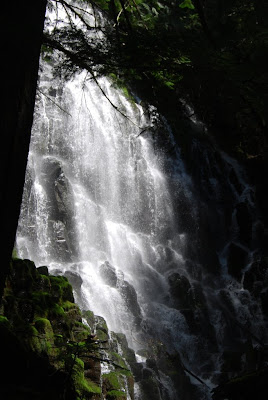 All that being outside made me want to move west…