To mark the last day of Summer yesterday, Myra (otherwise known as "Superwoman") and I decided to get back to work and resume rehearsing for our upcoming recital tour. We started up by working on our opening set of Purcell, assessing it's flow and digging deeper through it's dense, intensely emotional twists and turns.
Much more exciting than Purcell, though, was getting to meet this little one for the first time, who slept quite peacefully through most of our noise-makings yesterday afternoon. 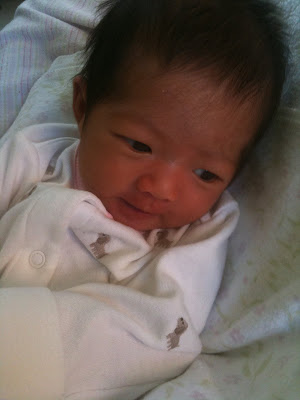 Abby Huang
Posted by nick at 2:09 PM No comments:

For your weekend enjoyment, a few first impressions via YouTube...
The first 4 videos that appear after searching for "Henry Purcell" on YouTube:
Incidentally, number 3 is one of my favorite pieces that he wrote - partly because I love the poem so much.
The first 4 videos that come up when searching for "Benjamin Britten" on YouTube:
Funny that YouTube and I share the same first impression of Britten...Number 4 is a fascinating documentary most definitely worth checking out.
What were your first impressions of Purcell and Britten? What were the first times you experienced their music?
Posted by nick at 12:17 PM No comments:

I’ve been thinking a lot about first impressions lately – those moments that are so perfectly and entirely represented in all their awkwardness by those painfully cheerful stickers that say “Hello! My name is…”

My first night at Marlboro this summer, a young Italian pianist came up and introduced himself to me saying, “Ciao, I am Gabriele! I think we are working on Britten together – Michelangelo Sonnets, yes?”

“Yes! It’s nice to meet you!” I said, immediately charmed by his Italian accent.

“What else are you working on here?”

At our first rehearsal, after our first reading of the sonnets together, Gabriele said (again, with his rather charming Italian accent), “Wow…this music is amaaaazing - is incredible!” He paused, thumbed through the score and said, “But I don’t understand nothing about it yet.”

“Have you played any Britten before?” I asked. He shook his head no. He scratched his head, looked confused at the music and said, “Let’s try it again!”

My own first impression of Britten was quite different. The first time I encountered Britten was as a 16 year-old second violinist in my youth orchestra in Detroit when we played his Young Person’s Guide to the Orchestra. At our first reading, I was immediately excited by the majestic beauty of his orchestration of Purcell’s initial theme which forms the basis for the piece. I was fascinated by how Britten showcased each section of the orchestra, exploiting each instrument’s range of color and expression. It was like being part of the an aural Wikipedia (had such a thing existed at the time). I was excited to be playing a piece that showed off and explained this incredibly complex and expressive musical entity that had become my life’s obsession since I started playing in orchestras at 11 years old.

15 years later, at a rehearsal this March with Myra, my own first of impression of the Britten’s Seven Sonnets of Michelangelo was not so different from Gabriele’s this summer at Marlboro. After our first reading of the songs, I said to Myra, “These feel really great in my voice – yet they seem kind of academic and strange.” Myra agreed – they did seem kind of dry and bizarre on first read, not understanding much of the Italian and having a missed a few (or many, at times) notes and/or rhythms here and there. Despite those initial impressions, I said to her, “Still, there is something in me that is really intrigued and excited by them and feels really drawn to them...I can tell that we are barely scratching the surface of what is here.”

It turns out that, in this instance (as often happens), our first impression was wrong. The sonnets are anything but academic or dry – they are packed full of an intense passion that is both heart-wrenchingly frustrated and disarmingly tender in its confessional vulnerability.

But more on that later...in the meantime, I'll leave you with that first impression of Britten I had at our first meeting 15 years ago: 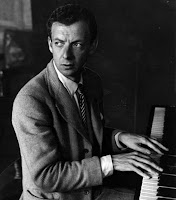 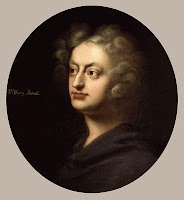 As my season gets off to a start, one of the very first projects I focus on is a short US recital tour in October and November - the very same recital tour that Myra and I were about to rehearse for when she went into labor the other day. The tour culminates in a very exciting event - our Carnegie Hall recital debut in Weill Hall. Much of my focus on the blog over the next two months will be focusing on the preparation for the recitals. Below is the program:

If love’s a sweet passion

I attempt from loves sickness*

There’s not a swain of the plain*

Not all my torments

Midnight on the Great Western (or ‘The Journeying Boy')

Wagtail and Baby (A Satire)

The Choirmaster’s Burial (or ‘The Tenor Man’s Story’)

At the Railway Station, Upway (or ‘The Convict and Boy with the Violin’)

Before Life and After

Come you not from Newcastle?

9 years ago today I was a brand new resident of New York City, having moved here two weeks before from the town where I grew up. I woke up thinking I would be starting another day of my new life at Manhattan School of Music, and woke up instead, like the rest of America, to a changed world.
And now, 9 years later, this is the view from my apartment tonight: 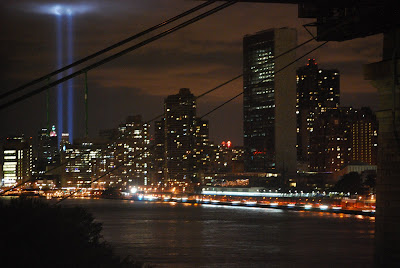 In January, during my sojourn in Düsseldorf, I was emailing back and forth with my manager and Myra, my pianist-partner-in-crime, about the program for our upcoming recital tour this fall when Myra sent a very short email saying: “Nick, I need to talk to you…please call me…”

I thought: Oh dear – this can’t be good news. What is she going to tell me?

I called Myra via Skype later that day and asked her what was up. “I’m pregnant, I’m due in mid-September,” she told me in a rather hesitant and worried voice. She poured her heart out to me about how she didn’t know if she could do a recital tour that started so soon after the baby was born, how she felt like she might be letting me down, and how she wondered what she should do. I told her that she most definitely not letting me down in the slightest, and that it was her decision to make. I also told her that of course I wanted her to do the recital tour, I told her that I thought of us as a chamber duo, and that of course I wanted her to share the experience of a Carnegie Hall debut recital with me. I also told her that, first and foremost, I was so happy for her and was so excited for her family. It provided a strange opportunity for us to reaffirm why it was that we wanted to keep working together and what was special about our musical relationship and our long friendship. I told her that this was great, exciting, and wonderful news. And I left the ball in her court.

After thinking about it for a couple of weeks, she eventually came back with her decision that she did, indeed, want to play. I assured her that I had an alternative plan, in case the baby came late, and we adjusted our lives accordingly. We looked at the calendar and plotted out when we would start working on the program – we decided to start rehearsing as soon as possible. We ended up starting to toe the waters of some of the newest repertoire in March. When May arrived, we dove in head-first, taking advantage of the situation to ease into all of this music and slowly find things in it, letting it come to us, letting the layers peel back of gradually and of their own accord. I left for Marlboro at the end of June, and we agreed to keep rehearsing after I returned until the baby was born.

Since I got back from the London a couple of weeks ago, Myra and I stuck to our rehearsal plan, and every time I would email her to schedule a session, I would jokingly preface the email with, “Are you still pregnant?” Myra would write back that, yes, she was still happily pregnant and that we should meet at 12:30 the next day.

After debating whether or not to try to pack in another rehearsal this last week, we eventually decided to meet once more this past Friday at 1:00. As I said goodbye at our previous rehearsal, Myra said to me, “We should try to get in as much as we can before the baby comes, since she seems to be taking her time…” I agreed and left, looking forward to our next rehearsal. When I walked in the door on Friday, I started to head towards the piano when Myra told me that she didn’t think we could rehearse that day. I looked at her and asked her if she was all right. “I think it’s time,” she said. So instead of rehearsing, we waited while her husband fetched their daughter, Elie, from daycare. Myra offered me a ride down to Midtown, which I found perplexing, but took her up on. We piled into the car and I entertained Elie while Myra and Ed debated which would be the quickest way to get to the hospital. Around 1:30, they dropped me off in Midtown, and I wished her good luck and a quick and easy labor, if such a thing is possible. Then, somehow they made it to the hospital at the speed of light, because at around 3:05pm, Abigail Emma Huang was born.

Many congratulations to the Huangs on their newest family member! 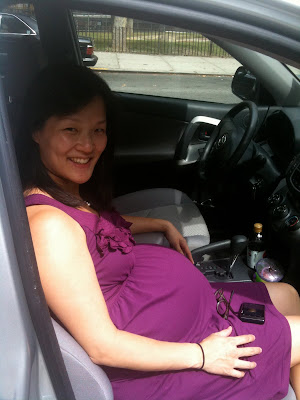 Myra at our "rehearsal" on Friday moments before the new arrival!
(I made her smile for this picture...)
Posted by nick at 3:20 PM 2 comments: