As our rehearsals in the the staging studio have wrapped up over the past few days, I managed to get a few snapshots (with the help of Jenny's camera one of the days, as mine was at the camera doctor) of some of my colleagues at work. I'm new at the whole taking-pictures-of-moving-people thing, and I happen to be on stage most of this show, so my pictures are a bit limited in in terms of what scenes I could photograph. Nonetheless, enjoy some tidbits of our rehearsals - we certainly have been! 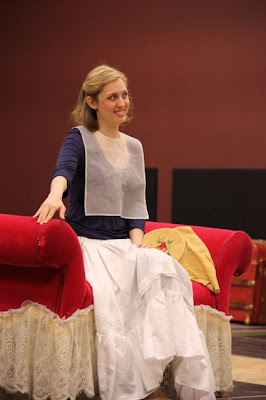 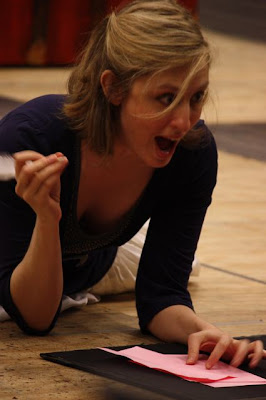 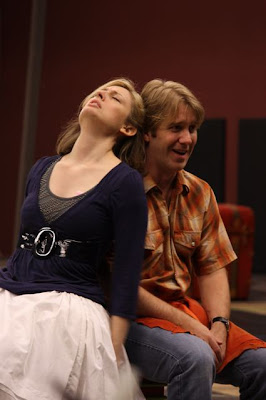 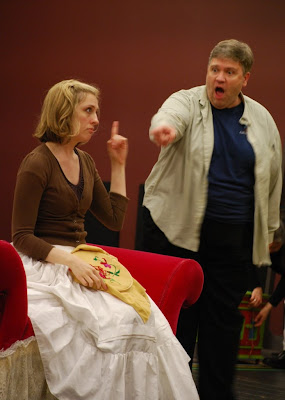 Bartolo and Rosina fighting over paper and pens 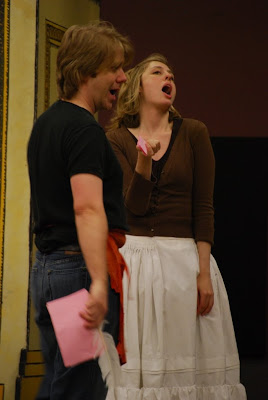 Rosina two steps ahead of Figaro

Rosina looking mighty sure of herself

The brilliant Rosina out here, Jennifer Rivera, just bought a new toy and has seemingly mastered how to use it in a matter of days.

Below is some of her handiwork, previewing our upcoming Barber over a few beers on our day-off:

If you don't follow it already, be sure to check out Jenny's fun and witty blog here.
Posted by nick at 5:16 PM No comments:

"Portland Opera exists to inspire, challenge, and uplift our audiences by creating productions of high artistic quality that CELEBRATE the beauty and breadth of opera."

As we began our first rehearsal for Barbiere on Monday, right before I sang my first notes in the opera, I looked up and saw that the mission of the Portland Opera was displayed prominently in the center of the wall, right above the conductor's head.

Never before have I seen an opera's mission statement, let alone seen it displayed in a rehearsal room. It wasn't even something that I had ever thought of. I mean, an opera company's mission is to produce opera, plain and simple, right? As I've gotten to know the building during this first week of rehearsal, I've noticed that the mission is displayed almost ubiquitously, serving as a constant reminder of everyone's purpose at the company.

On my walks to work this week, crossing the Willamette River, I've found myself still pondering the idea of approaching this profession as one of service. As a music student, I often felt selfish for pursuing a career in music. I watched as my closest childhood friends grew into adults and took their places in the world community, and marveled at their accomplishments. One dedicated her 20s to an organization called Operation Smile, traveling throughout the developing world helping children in need connect with doctors to get the treatment they were so desperately in need of. Another has chosen a career in promoting cancer awareness and educating communities how to better take care of their health. One is now a Psychiatric resident in New York at Cornell, caring for many mentally ill patients and researching the mysteries of how the brain works. One is a college professor who has dedicated much of his research to education policy. One used her law degree to provide legal aid to youth in need in New England. One is finishing her Ph.D. in anthropology, researching many of the mysteries of how we evolved to be as we are today. Educators, researchers, doctors, volunteer coordinators – it was easy to see how these people who have inspired me my whole life are giving back to society, each trying in their own way to make the world a better place.

As a young musician, it's really easy to forget why what we do is important. It's a tough world out there to get established, and we have to devote much of our focus to figuring out a way of paying the bills, carving out careers for ourselves. I'm not sure that many of us as young musicians ask this question of ourselves, but it is a topic that I have pondered much of my adult life. Over the years, I have come to feel that my personal mission is one close to what my colleagues and hosts here at the Portland Opera maintain. Music really does inspire, it really does challenge, and it really has the power to uplift us. In an increasingly secular, scientific, stress-filled, capitalist world, music feeds the soul, and I've really begun to feel that to be a musician is to choose a career of service – service to the human spirit. Each time I walk on stage, I hope to entertain, to move, to create a little beauty, and to help people ponder and revel in the richness of human experience.

I've looked up at that mission statement everyday this week in rehearsal and been so grateful to have that constant reminder of what is really important in our work. In a day where many are intimidated by the elitist aura that surrounds classical music and opera, it's refreshing to work at a place where we are reminded that reason we strive for excellence is not simply to be good or the "best", but because we want to give the best to the community we serve, and the community we live in, even if (as in my and my fellow castmates' instances) only as temporary guests.

It became evident early on yesterday during our first day of school here at Portland Opera that all of my cast mates have sung The Barber of Seville numerous times and are all pretty much veterans at their roles. Listening to everyone's mastery of their arias and incredibly clear initial ideas about recitatives and ensembles, I felt a little awestruck and impressed at everyone's facility. As we neared the finale of the opera, and I wondered why it felt so unfamiliar to me, I was reminded suddenly of the fact that at my last performance of this piece (back at Wolf Trap in 2003), the power went out, and we were forced to stop the performance after the trio in Act II, making the grand total of performances that I have done of this piece a whopping 1 ⅞.

Needless to say, I felt hyper-conscious of my inexperience, particularly because this is an opera with a lot of performance traditions, many of which I can't say that I understand. But rather give into my insecurities, which contributed to my first-day jitters that I always feel at an initial music rehearsal, it occurred to me what a gift this is to be surrounded by so many experts. While my slate is fairly clean in terms of expectations, I will be experiencing this for the second time with colleagues who have incredibly rich and layered concepts of the story, their characters, and their relationships. By the end of the day, my apprehension had given way to excitement about the adventure that is to come these next five weeks here in beautiful Oregon.

Last week, I was asked to attend a performance of Charpentier's Leçons de Tenèbres that was being given at a St. Thomas Church in New York City. Sitting in the dimly-lit, stone, Gothic church, listening to the sacred, angelic-sounding music and performance, I realized that it was the first time in a long time that I had been in a church at all.

My mind drifted as I listened to the music, my thoughts meandering towards church, God, and Eastertide. I grew up very actively involved in the Greek Orthodox Church as a kid. I spent many Holy Weeks serving as an altar boy, assisting our priest and reading many of the readings in the church liturgies and services. I attended Sunday School regularly, and I went to the church's Greek School every week. I participated in the church's oratorical competition, was president of the youth group, and danced in our Greek dance group.

As I grew up, for a wide variety of reasons and as many people do, I grew distant from the church. As one learns more about the history of the church, the history of the Bible, and the history of religion in general, it's easy to grow disenchanted with religion. I began to see religion as more of a political entity rather than one of faith, and as the power and voice of the religious right in US politics has risen over the course of my lifetime, it has become even easier to view it through that lens. The concurrence of Holy Week, the most important holiday in Christendom, and the seemingly unending string of scandalous revelations about the Pope and the Catholic Clergy didn't help matters much last week either.

The day after the concert, I was catching up on reading some of the blogs I follow when I read this post over at the Huffington Post. Reading Albert's entry and thinking back to how I felt the previous night at St. Thomas, I was reminded how my faith has always been kept alive though music. When I called to wish her a Happy Easter on Sunday, my mother gently tried to make me feel guilty (in that way that Greek mothers do) for not going to church last week, yet I didn't feel an ounce remorse, because after having spent the past month immersed in both the St. John and St. Matthew Passions, I felt like I had been celebrating Lent, Passiontide and Easter all in my own, more personal, and musical way.

In getting ready for tonight's performance of the St. Matthew, I've been constantly reminded how Bach's music demands humility and meditation. Whereas with other composers, I can put the score down for a while without feeling like I am losing anything by letting it go for a bit, in order to feel ready for tonight, I, a person who considers himself more "faithful" these days as opposed to "religious", have had to sit with this score daily, aside from practice, simply to study and absorb it. The Passion of Jesus Christ according to St. Matthew has consumed most of my waking hours for the past month. It makes me wonder – have those "religious" pundits on the 24-hour news channels who debate about gay marriage and argue about the latest church pedophilia scandal spent this much of the last month studying the Bible and pondering what it is to be part of a religion?

S. D. G. – Bach wrote this at the end of each of his Church cantatas, standing for Soli Deo Gloria: For the Glory of God alone. Whether it's for God, for music, for Bach, for the people in the audience who come to hear us tonight, or for all of those, it's that kind of humility and sense of service that I hope to carry inside me when we walk out on stage tonight.