As the New Year has approached, I've heard a lot of people tell me how happy they are to bid good riddance to 2009 and welcome 2010 with open, hopeful arms. While I am inclined to agree with that sentiment, there are many incredible and special memories that I have from this past 12 months, as well. 2009 was a year of drastic change that involved learning many life lessons on every level, and while lessons are not always pleasant to learn and growing sometimes involves growing pains, I am so grateful for each and every experience. Thinking back on the past year, many of the happiest and most meaningful moments for me were somewhat quiet ones– their simplicity is what touched me the most deeply:

- A small preview recital that Myra and I gave at Rockefeller University before our recital tour in January. It was one of the most emotionally intense performances that I think we have ever given, and the audience there was especially appreciative. Perhaps because it was early in the morning, I was feeling especially open and vulnerable and just poured myself into it. I discovered a new level of how much one is able to give of oneself in performance that morning.

- Superbowl weekend in Miami – the first real vacation I had taken in a long time. I rediscovered the value of kicking back and doing nothing but soaking in some sun by the pool for a couple of days and exactly how healing that can be.

- Stepping in at the last minute to sing The Creation at Carnegie Hall with Helmuth Rilling and the Orchestra of St. Luke's – That was another day I learned exactly how much I am capable of when I just give myself over to the music and the moment. I felt a dream come true that night.

- My first St. John Passion Evangelist in Boston in March – It was a weekend of great fun with wonderful musicians who played and sang their hearts out and music-making with a good friend on the podium – the perfect way to experience such a great and important piece for the first time.

- Rehearsing and performing at Marlboro – As it has been for the past two summers, my experience at Marlboro this summer was incredible. My groups worked so hard on our pieces, and I felt like I forged and solidified special musical relationships while working on those projects. It was Marlboro at its best – colleagues and friends working together as hard as possible, for as much time as necessary, and at the highest level with an unparalleled commitment to music. And the audiences are part of what was special, too – so open and attentive in that unique way that is particular to those music-lovers who fill the hall up there in Vermont. It's amazing to see an audience so enthralled by music as strange as Britten's Canticle V or swept up in the stories of On Wenlock Edge or respond so viscerally and excitedly to Monteverdi.

- The cast and crew of Falstaff on the Glyndebourne Tour – The level of camaraderie I experienced this fall while at Glyndebourne was perhaps unmatched thus far. We shared countless laughs, hearty meals, and good times during our three months together. I had the most fun with my new friends as we toured around England, and it was an experience that I will forever treasure.

- Visiting with my family in Glyndebourne – the trips that my mother, aunt, and brother all made to Glyndebourne were some of the best family bonding time we have had in years. It was tremendous fun to show them around what had been my own little corner of England for two months.

There is already so much to look forward to in 2010 that is on the calendar (including the release of this in a few short weeks!), but what I almost am more excited about are the countless unexpected moments in store.

All the best for a happy, healthy, and beautiful 2010! 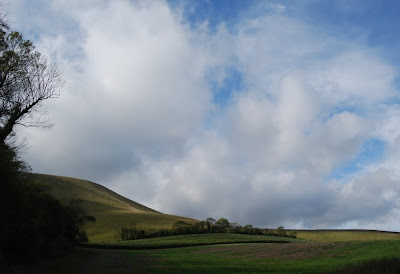 Tonight, what seemed like the never-ending story at the beginning will come to its conclusion as we sing the last notes of the fugue that ends Falstaff, and the 2009 Glyndebourne Tour will come to a close. At Wednesday's show here in Plymouth, I looked up at Elena as she effortlessly sang the first of her three answers to my call of "Bocca baciata non perde ventura…" and felt a twinge of melancholy, sad that we only had one more show to go. It surprised me, because as we had entered the home-stretch of this tour, my homesickness had started to take over, and I was beginning to get excited at the prospect of sleeping in my own bed for this first time since August.

We arrived to start this journey at the very beginning of September, and during a conversation with a friend back in the states the other day, they pointed out that this has basically been like a semester abroad. Yesterday, during a farewell lunch with my dear friend and colleague, Susie, a good friend from my HGO Studio days who has been on the music staff of the tour and also playing the continuo for the Così fan tutte performances, she asked me what I have learned on this tour. It made me think back to student days when our lives were actually divided up into semesters, and our lives changed dramatically in the span of those 12 – 14 week stretches, our minds soaking up new a constant, endless flow of lessons like sponges.

Some of the things I've learned have been new information. Little things like the English have this habit of saying "Are you alright?" instead of "How are you?", which had me thinking that I constantly looked like I was depressed for weeks until I realized what they were actually asking. Many of the discoveries I've made about life and music in the last three months have been a deepening of my understanding of things I already thought I understood thoroughly. I've rediscovered how much I love to perform. After last season's intense study with my teacher in New York, I've had ample practice time to integrate a lot of what I learned there into my repertoire – both new and old – and I have new questions for when I head back. I've learned how to be rooted a bit more in the present moment and really enjoy the positive aspects of my time on the road, despite the great homesickness I feel at times. I've discovered new friends and deepened friendships with old ones. I've dug deeper into Fenton's character, finding more layers to him than I realized were there before. I've learned that we can always give the audience more. At the end of this adventure, I find that while I feel a great sense of accomplishment and pride, I also feel quite humble and more open than ever.

To all of my colleagues in the cast, orchestra, crew, music staff, and chorus these past three months, thank you for an incredible time. It's been an extraordinary three months, and I leave a slightly different person thanks to the good times we have shared together.

Posted by nick at 6:55 AM No comments: Links to this post