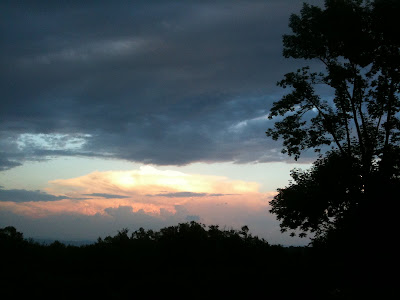 A friend posted the obvious on my Facebook Wall the other day: “Last blog entry, June 17th. Just saying - I don't get to see you, I don't get to read you.” Feeling justly scolded, I wondered to myself: where has the summer gone? Intense, mind-blowing, and action-packed, I realized I had been so immersed in music-making, I barely had the capacity to think about anything else all summer. In the last month alone, I have performed 9 different concert programs, 7 of them from memory. The list of composers I’ve performed this month has been thorny and dense: Béla Bartók, Alban Berg, Leonard Bernstein, Benjamin Britten, Robert Schumann, Alma Mahler, Hugo Wolf, and Alexander von Zemlinksy – so much for the typical “light” summer-festival fare. The constant study, rehearsal, memorization, performance, and travel all pulled me into a vortex in which the days sped by while I barely noticed the passing of time. All of the sudden – or so it seems to me – I am sitting in Heathrow waiting to fly home, and it is the end of August. I guess time really does fly when you’re having fun.

Shortly before I left for the summer, I met up for drinks with a friend and colleague who is an artist manager of singers at one of the big artist management companies in New York. We don’t get the chance to catch up often - our busy schedules and my limited time at home prevent that - but we finally had managed to carve out a moment to sit and catch up over a few glasses of wine. As we caught up, he asked me what my summer plans were, and I told him that I would be coming back to Marlboro. He raised his eyebrows and looked at me over the rim of his wine glass and said, “Oh? Wow! Really? You are?” He seemed surprised that I would be going back for a summer of rustic dorm-living and communal cafeteria meals at this point in my life. I chuckled and pointed out that that was, in fact, much of the reason to go back to Marlboro: to say hello to that inner child, to greet the perpetual student in all of us.

I understood that he didn’t really have a total and complete understanding of what Marlboro is – it’s so difficult to explain to people who have never visited. You don’t have to perform? No one is a student, while yet everyone is a student of a sort? You just rehearse? You share a bathroom? Yes, all of these things are true, and yet somehow they don’t sufficiently describe what Marlboro is. Marlboro is somehow more than the sum of its parts.

Seventy–five or so musicians convene at the little, elite, isolated musicians colony that is Marlboro every summer for 7 weeks. We live in dorms on the campus. We serve each other dinner in the cafeteria. We maintain a meal schedule that we joke bears a striking resemblance to the mealtimes at a retirement community (although, ironically, it is the oldest members – who are in their 70s – who complain the most about how dinner is too early). We throw napkin-balls at each other at meals. We relax over beers in the coffee shop after longs days of rehearsal. We climb the roof of one of the dorms at night and stargaze, discussing life, love and the pursuit of music. And more than anything else, we rehearse.

About a week into the festival, one of my colleagues and I were discussing the cultural adjustment from our busy, frantic lives in New York to our quiet, close-knit, think-tank situation in Vermont when she said, “You know? I think the roughest adjustment for me is that I only have myself to deal with here.” At first, I was surprised at her comment. For me, the only time I ever feel like I am a part of a community, a part of something larger than myself are the summers I spend at Marlboro. The rest of the time, I am running from concert to concert, hotel room to hotel room, spending countless hours alone. At first glance, the whole point of being at Marlboro is to play and interact with others, but the more I thought about it, the more I understood what she was talking about.

Coming back for a fourth summer, I had certain expectations about what my experience was going to be like. As I had pointed out to my friend over drinks earlier in the summer – I knew that the point of coming to Marlboro is to learn, to discover, to dig deep. But what I was unprepared for was how challenging it would be to be that open. When I first arrived, I felt like much of what I was realizing was how far I have come on my journey. I was able to see how much I had grown over the past years since I started coming to Marlboro. But having that much more knowledge and experience, not being a completely clean slate anymore, I found it hard to be open to finding the next level. My ego would rear its prideful and lazy head inside me, and I found that ultimately, I was in a constant battle with myself. As I eased into the pace of things there, I found myself praying every morning for the grace to be beginner again.

As the summer progressed, I found I was grateful I fought that battle for openness. Worlds opened up to me in rehearsal that I never imagined, and I felt myself discovering layer after layer of emotion, depth, and beauty in all of the music I was rehearsing. Through all of this musical digging, I began to see what a difficult balance it is to maintain both self-assurance and humility as we progress further into our “adulthood” and how challenging it can be to discern the difference between ego and confidence. Confidence, like true strength, is a flexible, open, eager, and wise thing. Ego is what is lazy, entrenched, closed, prideful, and deeply stubborn. Oddly enough, ego can look an awful lot like confidence at times and trick you into getting stuck.

The radio program, Performance Today, came for a few days this summer to do a feature on Marlboro and what happens there. They interviewed many of us and played many performances from this and past summers, doing an excellent job of painting an aural picture of what Marlboro is. The thing that I found so moving while listening to the interviews was hearing so many different generations of people talk about how they had found themselves at Marlboro. Marlboro certainly held the same special place in my heart before this summer began, yet somewhere along the way, I had forgotten that finding oneself is an ongoing journey. This summer was no exception in guiding me further along that path.

Posted by nick at 7:16 PM No comments: Links to this post