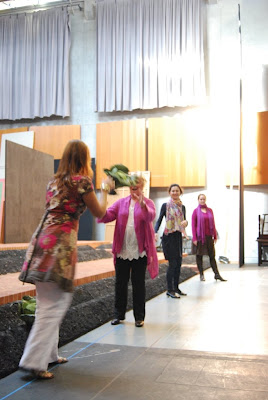 The post I labeled as "Random" the other day was actually more a bit of synchronicity than I let on earlier. In rehearsal here at Glyndebourne, the recurrent theme has been teamwork, and for a show as ensemble-oriented as Falstaff, nothing could be more important to get this show on its witty, sharp feet. My colleagues here have created a sense of camaraderie that I have found rarely paralleled in other operatic experiences that I have had. It's not that I have worked with a plethora of prima donnas or that most of my past colleagues have been a string of difficult personalities – it's more that this particular cast has gelled in a way that I have only experienced a few times before, and I know enough to recognize just how special this experience is proving to be as it unfolds.

One of the odd symptoms of our hive-mindedness has been to show up for rehearsal color-coordinated. Tuesday we all came to work wearing some matching shade of pink, purple (as you can see from the slightly blurry picture above). Wednesday and Monday, we all wore black. It's been happening since the first week of rehearsal – the joke about getting the memo to wear a certain color to work grew old by the beginning of the second week. I've never seen anything like it.