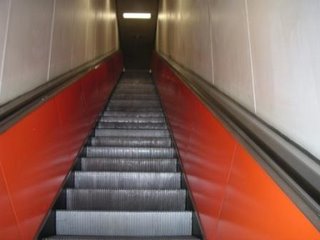 Today marks my first week in . is a strange city, full of large, monolithic, almost brutish, grey and silver modernist buildings and lots of businessmen, although I am discovering that it has its charm. The feeling of being surprised like this by a city gives me an eerie sense of deja-vu---I had the same feeling when I moved to four years ago. I’ll never forget my first trip to four years ago. The most memorable moment was in a van with five other singers on our way to downtown from . As we drove through what seemed like an endless ocean of strip malls, used car dealerships and porn stores, my dear friend Laquita turned to me and proclaimed, “This city is busted. There is no way I am coming down to this dump.” Before we knew it, we had packed our lives into my cherry red 1997 Pontiac Grand Am, Laquita was in the passenger seat, and we were making the move down from to the sprawling mass that is . Four years later, I still live there.

While my first impression was not quite so strongly negative here, it seems that Frankfurt is having a similar effect on me--- was the least exciting stop on my first European audition tour. But where am I making my European debut? . Actually, I will have spent exactly one sixth of the year here by the time 2006 is all said and done, with a scheduled return for another month next spring. So, I am off and running to find charm and personality so that I really can enjoy my time here.

Well, that sentence about me “running” to find this city’s charm is actually a bit of a lie. Every time I arrive in a new place, I suddenly become a totally agoraphobic person. This magical effect new places have on me is obviously exacerbated in , where I have foreign languages and culture shock to deal with.

When I tell people what it is that I do for a living and then proceed to whine about how I am more often traveling than I am at home, they almost inevitably say, “Oh, how wonderful!” For instance, when I told people that I was going to spend a six week stint in Frankfurt this spring, they would (without fail) say things like “How exciting!” and “Lucky, you!” or “Oh, you’ll love it over there!”, jealous of all the time I was going to get to spend in Europe.

What people don’t understand about me is that I am deathly afraid of people. I know that I come across as an affable, friendly, somewhat outgoing person, but the thought of having to make contact with strangers in a foreign country gives me diarrhea. When I envision myself in and try to think of the positive aspects of the fact that the majority of my life is spent on the road, I dream of myself as being a jet-setting, trendy, fearless adventurer. I envision myself walking confidently amidst the beautiful architecture, history, art, and landscapes of Europe; or sipping tea in decadent cafes while I read amazing works of literature that enlighten me by the second; or meeting fascinating new people from other cultures and building lasting friendships around the world---it’s all a very grand image of myself and my adventures in my brain, I assure you. The reality is that the thought of even asking someone where the restroom is gives me an anxiety attack. I mean, it took me a week to work up the courage to walk into the grocery store and buy groceries here. It takes me hours every day to work up the courage to go into a restaurant to eat a meal or even go into a café and order a glass of tea.

As to what I am afraid of? Well, that people will hate me, of course. Or think me stupid. But the ultimate reason is I am afraid that people will despise me and that I will be friendless during my time here. It’s a paralyzing phobia, and I can totally acknowledge that it is a completely ridiculous worry of mine. Or is it?

Deep down, I know it relates on some level to the fact that I was once a twelve year old who was ostracized from my society of fellow middle schoolers. I know this sounds dramatic, but what isn’t dramatic at the age of twelve?

When I was in elementary school, I had the privilege of attending a small Montessori school out in the woods surrounding . The school only had about 30 students in it total, from the 1st grade to the 5th grade. Being a school in the middle of the woods, and having a relatively small student body comprised mostly of the children of crunchy, liberal parents, we all got along and did fun things like run into the woods to build forts, play hide and seek, and hit trees with sticks when we weren’t learning our addition tables and such. When it came time for me to go to the sixth grade, I chose to go to another private school, although this one was much bigger and full of kids who had previously gone to bigger public schools. For the first time since the first grade, it was a completely new environment for me. I knew nobody and had never been in a school environment that involved a homeroom, a lunch room, homework, and popular people. I didn’t know how to go about meeting all of these new people, and I was terrified the whole time that people would realize that I was gay, that I was a dork who liked books, that I once liked New Kids on the Block, or any variety of things. Basically, I was afraid someone might get to know me. Why was that such a terrifying thought? Well, what if they got to know me and all of my faults and then discovered that they hated me and then told everyone else not to like me?

Can you see the parallels between that jarring, terrifying experience and this one? Here I am in a foreign country, where there are cultural and linguistic differences (I mean in the States, Walgreens is open twenty-four hours, while practically nothing is open here on a Sunday---and I have yet to meet a German person who goes to church), and to top it all off, everyone I meet is a new person. It’s like I am once again that little 12 year-old sixth grader in a new place, with new people, petrified that everyone will hate me and I will be left all alone again.

Perhaps what I should try to make conscious in my brain is that I am not 12 years old anymore, and that I am a person who has much to offer and who people like, love, and care about. Perhaps, what I should try to do, to put it more bluntly, is to grow up. Why are we so ashamed of who we are? I envy those few people who never seem to have to question themselves and never put stock in other people’s thoughts about them. Maybe I can be like them when I grow up someday. In the meantime, I should at the very least try to conquer my inner twelve year old, work up some courage, and fly out into the wonders of and discover its charm and its people.

it always surpsises me how much u and i are alike at times. i've always looked up to u for your ability to make friends and be so likeable and i must say back in our greenhills days i was somewhat jealous. i guess one thing i'd say is that while u've had these worries since u were 12, just think about all the ppl who u have met and who have been given the wonderful opportunity to get to know u who do love u for the person u are. personally i don't know of many ppl who hate Nick Phan and if there are any they're foolish.

as for that inner 12 year old, i've still got the same kid in me from when i started Greenhills in 7th grade. but i think we've both turned out alright, if not much more than that. maybe not everyone likes us, but not everyone is supposed to.

i just wish i had the courage to even go to a place like u have on my own.