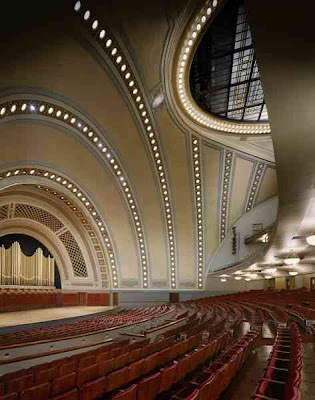 I wrote a little blurb for the program for this week's performances of Messiah in my hometown of Ann Arbor, Michigan - a real homecoming moment for me. Here it is, for those of you who are not going to be in Michigan this weekend:

The very first time I ever heard Handel’s Messiah, I remember sitting in the first balcony of Hill Auditorium, carefully reading the program notes before the performance, trying to understand what exactly this Messiah-thing was. I was so young I don’t even remember precisely what year it was, but it was long before I ever considered becoming a singer. The reason I remember going was to see my violin teacher play in the Symphony. I had lots of questions: Did it tell a story? Why do we all stand up to sing along with that ‘Hallelujah’ moment? What is an ‘Oratorio’, anyway? My inquisitive mind absorbed as much as it could before the first notes of the Overture. From that moment on, I was transfixed.

The first balcony of Hill was my favorite place to see concerts while I was growing up in Ann Arbor. It felt like the perfect distance from the stage – I wasn’t too far away to feel disconnected (not that distance matters in Hill – the sound actually gets better the higher up you sit), and I wasn’t too close, so I could see all of the action without missing a thing. It was from that first balcony that I caught a glimpse of how powerfully expressive music-making could be, watching Yo-Yo Ma play the Dvorak Cello concerto with the Orchestra of St. Luke’s, getting my first taste of great singing live when Cecilia Bartoli gave a recital, and having my heart broken by Les Arts Florissants’ semi-staged performance of Acis and Galatea.

I cultivated my passion for classical music as an audience member in Hill, and it was on the stage that I cut my teeth as a young performing musician. It was in Hill, sitting in the back of the viola section of the Michigan Youth Symphony where I discovered what it was like to play in a large symphony orchestra. A year later, on a whim, as a sophomore in High School, I went to sing a last minute audition for Jerry Blackstone to try and get into the Michigan Youth Chamber Singers. Not having anything else to sing for him, I sang the National Anthem. After I had finished, he said ‘sounds great!’ and told me to go pick up some music for our first rehearsal that afternoon. A few months later, he would assign me my very own first, tiny oratorio solo to sing in Hill in Mozart’s Regina Coeli, and my journey as a singer had begun. I would spend the next 7 years performing intermittently and even recording in Hill as a choral singer and soloist, honing my craft and gaining valuable experience that would set the foundation of what would turn out to be a life in music. To come back to Hill for such an important UMS tradition, standing on stage as a colleague with the people who started me on this life journey, marks not only a dream come true, but the ultimate homecoming.

More information about the University Musical Society in Ann Arbor can be found here and here.