The Cognitive Power of Breath

During my first semester of Opera Workshop at the University of Michigan, our director and teacher’s mantra was “remember your breathing”. At the time, I remember thinking that such advice was so obvious that it bordered on the obtuse. “Of course I’m breathing! How could I sing otherwise?!” I thought. It didn’t take long to dawn on me that he wasn’t asking me to remember what my voice teacher was trying to teach me – he was trying to get me to slow down my perception of time and root myself in the present moment.


As my yoga practice has intensified over the past few years, I’ve been thinking a lot of that seemingly simple advice from my Opera Workshop class at University. Just about every yoga teacher tells their students to focus on their breathing – it’s integral to the whole moving-meditation aspect of yoga. As I flow through my practice, I do my best to make sure that my feet are grounded, my knees in line with my middle toes, and my sacrum properly aligned all while I try to twist my body and my arms in all sorts of directions – it's a lot that one has to be mindful of as one flows from one pose to the next. I’ve found that in the midst of trying to achieve these crazy contortions, it’s been that focus on the breath that allows my panic and frustration fade way to clear-headed mindfulness, allowing me to ease my way into deeper realizations of the poses. 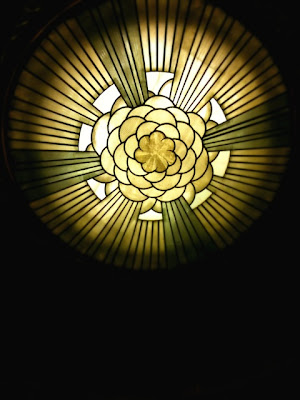 While I was touring Handel’s Ariodante with Il Complesso Barocco last month, I found myself in a rather extraordinary situation in which I was making three major debuts in three very famous venues in three different countries within the space of a week. People often ask me if I ever get nervous – I would be lying if I said that I wasn’t that week. While I was excited about all of those concerts, I think that the one I was most excited about was our performance at the Théatre des Champs-Élysées, which marked my Paris debut. After dreaming for so many years of getting the chance to sing in Paris, I found myself making my debut there with some of the most fantastic colleagues I have ever had the pleasure of working with on the very stage where Stravinsky’s Rite of Spring premiered 98 years earlier. Getting ready for the concert, I kept marveling at how incredible it was that I was getting to make a debut in Paris in such style.

Sitting on stage as patiently as I could until the end of Act I, waiting to sing my first aria, I felt my excitement turn slowly into nerves, the voices in my head starting to shout out thoughts of unworthiness and painting out scenarios in vivid detail in which everything went awry. As my mind would start to wander off into some alternate universe of doubt, I found myself constantly coming back to my breathing, letting the sensation of the inhalations and exhalations carry me back to the present moment, which was in reality, one to savor and enjoy. When I finally got up to sing my first notes of the night, it was that focus on the breath that allowed me to completely clear my mind of its crazy inner dialogue and open myself up to letting Lurcanio’s story flow through me. My breathing didn’t just help me sing well, leading my expressions and emotions, but it also helped channel my thoughts to the present moment and focus on the task at hand. Funnily enough, the advice that I initially thought was so silly in college proved to be the one thing that enabled me to enjoy our performance that night.

I’ve been watching a lot of the archived TED talks lately in my free time here in Florence, and I stumbled across this one given by the soprano, Claron McFadden, last year, in which she sings a cool piece by John Cage – Aria. Her story about her experience at a meditation retreat in Thailand is what really struck me about her talk – I loved how her host compared singing to a meditation. My experiences over the past few weeks have made me think of singing the same way lately.

Love this post. And Paris loved you!! Shall we meet in Versailles, next?!?!

Thanks, Joyce! Versailles sounds good, I guess... ;-)
Hope all is well up in London!

Sound's interesting and the perfect instruction for a singer! Thank you Nick for sharing these feelings. Watched you carefully on TCE stage, even while you were waiting, you looked so relaxed and you sang so beautifully. Am so glad to have a ticket for Saint Denis. Keep going like that, Nicholas, and there will be many more TCEs, Pleyel's, Konzerthaus, Liceu, and so on! See you soon... and... just in case you'll have some spare time:
Siffleur de ballons, 34 rue de Cîteaux, Paris 12eme! :)