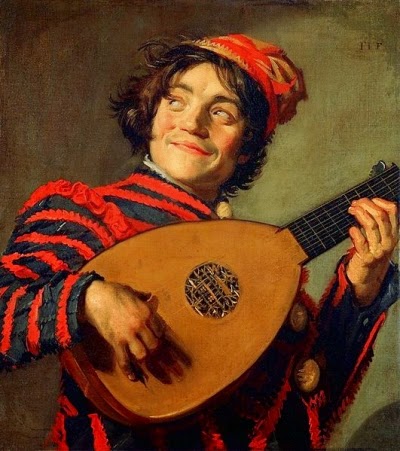 See how happy he is, playing his lute?

The text of the second song in Britten's Songs from the Chinese, 'The Old Lute', which Eliot Fisk and I performed recently at the Menil Collection with Da Camera of Houston, has been nagging at the back of mind since our concert a few weeks ago.
The Old Lute


Of cord and cassia-wood is the lute compounded;
Within it lie ancient melodies.
Ancient melodies weak and savorless,
Not appealing to present men's taste.
Light and colour are faded from the jade-stops;
Dust has covered the rose-red strings.
Decay and ruin came to it long ago,
But the sound that is left is still cold and clear.
I do not refuse to play it, if you want me to;
But even if I play - people will not listen.
How did it come to be neglected so?
Because of the Ch'iang flute and the zithern of Ch'in.

"But even if I play - people will not listen."  I find it somewhat cheeky of Britten to have chosen this poem to set to music - it is, of course, one of the most beautiful songs out the cycle of six, and one can't help but feel as though he is poking fun at 'present men's taste' somehow.  Again - it also seems somewhat contradictory to his artistic philosophies, as he spearheaded a movement of British composers to look backwards - his music was profoundly impacted by the music of Henry Purcell and John Dowland.

Certainly, it’s because my most recent album released on Avie records last week is full of songs by composers (lute-players, even!) who have been dead many hundreds of years.  Perhaps also it's because a friend and colleague posted this article about declining arts audience numbers to his Facebook wall the other day, that I find myself wanting to debate the poem, which has become some sort of metaphor for the so-called 'death of classical music' in my mind.  Needless to say, I found it ironic that we performed the song a few weeks ago in front of a packed audience.

This past summer, my partner was doing a bit of work for the Berkeley Festival and Exhibition, a biannual early music festival that takes place in Berkeley, CA.  As a result, I was able to attend the opening concert of the Festival - a concert of 15th century music for shawms, period bagpipes, recorders, and sackbuts performed by the ensemble, Ciaramella. The thing I found most fascinating and shocking about the performance was that the hall in which this concert was being held was packed to the gills with the most enthusiastic audience members.  There was even one particularly excited woman who was wearing a 'Got Shawms?' t-shirt.

Who would have thought there was an audience for shawms and 15th-century counterpoint?  Most people I know don't even know what a shawm is.  Yet, there we were, sitting in a completely full house - full of people who not only knew what shawms were, but were legitimate fanboys and fangirls of the ancient instrument, cheering with the same level of gusto as pre-teen girls at a One Direction concert.  This was a clear demonstration to me that an audience can be truly built for any kind of music of quality.

During that concert, I found myself thinking about the organization I co-founded four years ago with two, amazing colleagues in Chicago, Collaborative Arts Institute of Chicago, an organization that is committed to promoting art song and vocal chamber music.  Much like the shawm, most people I encounter who are not classical musicians do not know what an art song is.  As we have built CAIC up from scratch over the past four years, it has become increasingly evident that many people are simply not familiar with this surprisingly large niche of classical music, and I've found it requires a lot of explanation when trying to build awareness of our little organization and its mission to promote and protect this intimately beautiful corner of the classical music repertoire.  Nonetheless, like the early music movement built a brand new audience over the past 35 years, CAIC, too, has continued to grow in Chicago – our audience numbers expanding healthily season after season. Listening to the shawms drone on and looking around at that enthusiastic and sold-out audience last summer, I felt like I was seeing what is possible with passionate advocacy and strong commitment to spreading the word about great music and music-making.  I found myself optimistic for the future of CAIC, as well as the future of classical music, in general.

It is not infrequent that when putting together projects or discussing the subject of recitals or repertoire with many people on the administrative side of our industry, I hear the words: “Oh, that won’t sell.”  These words really disturb me to my core: Underlying this defeatist statement is the belief that, even if we play, people will not listen. They’re just not interested.  Instead, we should subscribe to the tried and true – look at past audience numbers, see what has been popular, and just keep repeating that formula.

In a digital age which has inundated us with an infinite number of options of art and entertainment from which to choose, it’s not that people will not listen.  It’s that they don’t see the option amidst the dizzying myriad of choices.  If they aren’t seeing it, it’s not a matter of a lack of interest, it’s a matter of cultivating that interest through drawing in the potential listener, the potential audience-member.  In these less simple times in the media, that means advocating and advertising a bit more loudly, with more insistence, and more creatively.


The songs on my most recent album are structured so that when one listens to them in order, they tell the story of a young man who falls passionately in love for a woman and who is ultimately destroyed by the fire of that passion. Aside from feeling that the repertoire naturally lent itself to it, the main reason I chose to structure A Painted Tale so that it had a dramatic framework and told a story was because I wanted to draw attention to dramatic and emotional power of these seemingly simple songs.  I wanted those already familiar with these songs to hear them with fresh ears and in a different context.  And I wanted people completely unfamiliar with them to have a reason to pause when considering that dizzying myriad of options as they browsed for something to listen to.

In just the first week of its release, A Painted Tale debuted as one of the top 25 bestsellers on Billboard’s Traditional Classical chart. And while that is a tiny milestone in the larger scope of things, it gives me such great hope for the future of this amazing art form that is classical music.

We are playing, and people are listening.