Time to go – almost. I have one final performance of La finta semplice tonight. My apartment is in a chaotic state. Dishes finally clean sit piled on the drying area next to my tiny, two-burner stove. There are bags overflowing with paper to be recycled next to the trash bin, which is waiting to be filled with the foodstuffs I have not been able to consume this week. My clothes are clean, but have yet to be folded, and are covering the bed. Mysteriously, my suitcases are still in the closet – empty. I could be filling them with all of my belongings right now, trying to pack evenly, so as not to make them too heavy (I don’t want to pay the extra fee). I’m not doing that yet.

I went to to say goodbye to Nadine on Tuesday. We met at the train stat 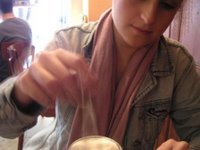 ion, helped her run a couple of errands she had to attend to before leaving for Spain the next day, and then had lunch at the old fire-station in Cologne that is now a great restaurant. We took a bunch of pictures, bummed around the city some more, and then headed back to the train station to say goodbye. When we got the platform to wait for my train, there was a weight in my chest, and a lump formed in my throat. I suddenly realized how attached I had grown to seeing her so regularly for the first time since college. We looked at each other and were surprised by our sadness. Saying goodbye to her, I realized what a special time I have had here these past six weeks.

, Nadine tells me, was a Roman city that used to be surrounded by walls. Eventually, as time went by and the city grew, the citizens of decided to tear down the walls in order to make it a bit easier to get around the city. All that remains of those walls are the gates that used to allow people into the city. Now they stand alone, doors with no walls that one can simply walk around. As I’ve gotten older, I’ve built my own walls to protect myself, like we all do. As time has gone by, I have fortified them more and more with each hurt life has inevitably dealt me, and it gets harder and harder for people to get through – and for me to get out. Seeing Nadine so much has allowed me to let the walls down for a bit. I hadn’t noticed how nice it felt to be open and relaxed and free with someone on a regular basis. At the train station on Tuesday, I suddenly realized how much I was going to miss that with Nadine.

My time here, while scary at first, has really been a great time. I’m not as alone as I first thought. I’ve really come to love it here. I can’t wait to come back.

Nick,
I'm glad your time in Germany was so enjoyable. It sounds like a beautiful place that gave you time for a lot of personal reflection. It must be very hard to leave a friend who enables you to be totally open, honest and yourself. I hope you can re-connect soon.