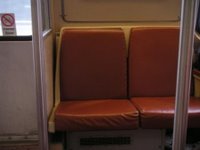 I ride a lot of public transportation. I love it, actually. I find it provides some pretty choice people watching time.

I grab a seat on the Metro from , into . It is the weekend. A fat, slovenly, pasty-white woman sits across from me. He husband tends to her needs and makes sure she is comfortable. She lounges in the subway seat, sprawling one of her legs across it, seemingly unable to get enough space. She coughs, grabs an unopened bottle of frozen water from her husband and sips it. A girl behind them sucks on some beef jerky, proud that she has managed to extrapolate the meat-substance from it'’s casing. Another white, blond couple that looks to be around 24 years old get on the train, a 3 year old daughter in tow. I look around me on the train, and notice that roughly 85% of the people around me have white skin, are fair haired, and at least slightly overweight. All seem to be tourists to visit their nation'’s capitol. The weekend Metro-crowd is clearly different from the young, slim, ethnically diverse professionals that flood the subway clad in Banana Republic and Ann Taylor during the weekday rush hour.

It occurs to me that these are people who are rarely in shared, public space. The only time that they might be in shared space with people that they don't know is in line at Wal-mart. These are the people who piss you off in the airport security line, because they don't know to remove their shoes before you get to the metal detectors and slow down the line as a result. I imagine that they spend most of their days in their cars, at work, or at home - a lonely and monochromatic existence. I wonder if the conservative base of fears the corruption of our family values because it is the only human contact that they can truly cling to. If their families leave them or drift away, what else do they have? No wonder they fear what is different - their lives aren't structured in a way that doesn'’t allow for diversity. Isn't fear the root of hate?