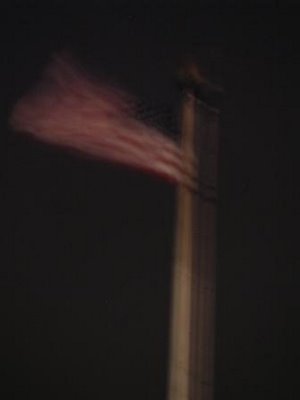 I tried to ignore the fact that yesterday was the fifth anniversary of the acts of insanity that occurred on September 11, 2001. I taught a master class at the High School for Performing and Visual Arts, I took my car in for a 90,000 mile service, I had a coaching with Jeremy, I saw The Illusionist. I did a series of mundane tasks that were on my to-do list. Planned events. The reminders of what yesterday was were ubiquitous - most notably the flag at flying at half-mast at the car dealership. Still, I did my best to remain numb.

Then I saw the cover of this week'’s New Yorker -– a man balancing on what seems to be a tight-rope, but in a white void. Turn the page, and there is the same man, in the same space in mid-air, but above the empty lot that used to be the . Something about the cover disturbed me -– it made me think of the images of people jumping out of the towers to their deaths below in a desperate attempt to not burn.

Five years ago, my roommate, Yvette, woke me up just in time to see the second plane hit the on NBC. We watched -– Yvette on the couch, and me standing bleary-eyed in the door to my bedroom -– as our world changed. I didn't get to any of the events or mundane tasks I had planned for that day. Instead, we climbed to the top of our apartment building and stared dumbly at the cloud of smoke and dust that was rising from the other end of the island.

May those who lost their lives that day be resting in peace. May those of us who survive them pray for peace and love to invade the living world.