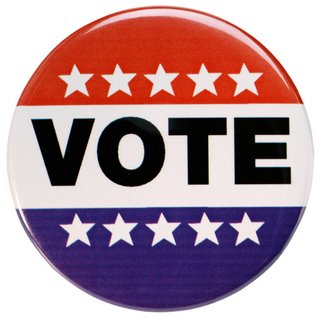 I have a confession.

I did not vote on Tuesday.

I am ashamed to admit this.

I understand that this makes me a hypocrite – I preach to people all the time about the importance of making your voice heard and our civic duty to uphold democracy. Jeremy and I have gotten into heated debates about the importance of voting. He contends that his vote is wasted in . I contend that it is of the utmost importance to the survival of democracy to have that single vote cast, regardless of where. I think he is being defeatist. Regardless of what I think, at least he voted on Tuesday.

The reason (excuse) I did not vote on Tuesday is this – according to the state of , my voter registration application was postmarked one day too late (October 11). I discovered this when I called to get an absentee ballot. I distinctly remember dropping the application in a blue mailbox in around 1:00pm on October 10, on my way to catch a plane to – so much for the reliability of the US Postal Service. In their defense, there were bad storms that day.

I was relieved to watch the results of the election come in Tuesday night with my roommate and was overjoyed to hear of Rumsfeld’s resignation as I walked out the door to rehearsal yesterday morning. My inbox was flooded with rejoicing emails from friends, ecstatic about the news. People were in great moods in rehearsal. But this morning, as I tried to sleep in after a night out with my roommate, I was dragged from my dreams into reality by the angry voice of conservative radio talk show host, Dennis Prager, emanating from my neighbor’s radio, located not far from my window. He was raging on about the liberal agenda and asserting that they had conducted a smear campaign against conservative candidates. I wish that I had awoken to NPR instead, but it dispelled the illusion that our nation is of one mind about the political situation now. While this is a huge step in the right direction, much remains to be done. It is just the first step. A change in power has occurred, but I sincerely hope that this is more than just a change in color on a chart.

I will admit to failing to vote as well, but my excuses is not nearly as good as yours: i simply didn't know enough about what was going on to feel comfortable voting. i was uninformed and that falls on me alone.

as for the late postmark, they only pick up the mail from those boxes at certain times of day (oftentimes in the morning) which may explain the 1 day delay.

i was happy to watch the election results come in as well. i watched a lot of CNN tuesday nite. it drove home the point that our country is still quite divided. there is much to be done but at least now the democrats have been given a chance to do things and bring about the change it seems much of this country wants. one theme i noticed in discussion while watching election coverage is that the more moderate center portion of the vote grew disillusioned with those in power catering to the far right. sorry for the rambling comment. to conclude, while there is not one mind, it is clear that there is a strong voice calling for change.

Hey there - tell Jeremy that someday his vote may not be wasted. I used to feel that way in Virginia, but, as we saw a few days ago, my absentee ballot did count!!

I will be sure to pass on the message - I certainly feel a bit less of an idealist now... :-)

BUT...you voted, got screwed by bueracy and cmae out ahead. Be proud. You voted in an election that meant something to all of us. We still won despite the lying, cheating, devious assholes. Feel good.