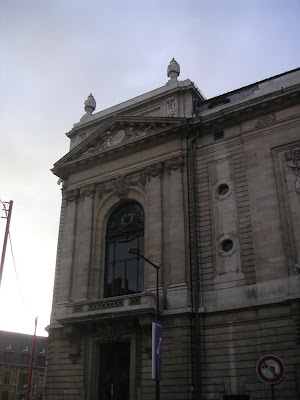 Normally, there is a certain energy slump that plagues the second show of any given run. Silly things tend to go wrong, people’s focus is not as sharp as it was at the opening, people don’t have the same energy fueling their performances. Oftentimes, the second show of a run feels like it takes twice as long as the premiere did.

We had a rare occurrence here last night, where the second show had even more energy than the opening. This is especially rare, because our opening felt like quite as strong performance, and second show syndrome tends to strike even more pronouncedly after a good opening.

I think part of it was the fact that many people had family at last night’s show. Mustafa had two of his sons visiting, the conductor, director, and choreographer all had various family visiting, and I had my parents and some close family friends in the audience as well. It’s always an exciting feeling to know that there are people who are close relations out in the audience, and it gave us that extra spark. Also, with the pressure of the opening off of us, we continued to relax into flow of the show, finding new layers in our character’s relationships to each other and new moments of humor. The show is continuing to find a life of it’s own, which is exciting.

I’m off to explore a bit of with my parents and our family friends today, and then back to work tomorrow afternoon – I have to start working on the projects that are coming up after this…time is truly flying by.

The other exciting development of last night was that I managed to pull yet another centimeter long piece of wood from the stage floor out of my knee as I was changing the bandaging after the show was over. Finally, my knee is free from the events of the dress rehearsal! I know this sounds strange, but I am tempted to keep this piece of the sliver for good luck...