My Battle with the Stage Floor 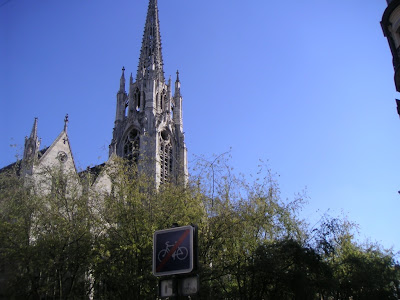 At the end of the Lindoro/Mustafa duet in Act I, Mustafa and I slowly come to our knees as we sing loudly clutching each other (me in desperation and he in an over-friendly, congratulatory bear hug) and then once the singing is finished, he bids me farewell and I collapse and pass out in despair into a dress at the front of the stage. Normally, at this moment, I feel a great sense of relief as the most difficult singing I have in the evening is over, and I can relax and enjoy Isabella’s first aria as I pretend to be unconscious.

Last night, at that very moment in the final dress rehearsal, I noticed something felt funny in my knee as I was lying on the dress. I wondered, “Did I cut myself? Will I stand up with my knee all bloody?”. I got up for the following recitative, sang it, and ran off stage to check my knee. There was no blood, but it seemed like there was a huge splinter from the stage floor in my knee.

I ran to the stage manager to ask for some first aid stuff and told her that I would be in my dressing room trying to squeeze it out. I tried, but to no avail. Then every single free stagehand came to my dressing room with bandages and antiseptic. Tweezers of various sizes soon followed. I ran onstage for my last couple of moments in Act I, in between returning to my dressing room to see if we could get the damned thing out. The quote of the evening was uttered by the stagehand who was the primary “surgeon” at first: “Putain! C’est profond!” or “Fuck! It’s deep!” for those who aren’t Francophiles. Not the words I wanted to be hearing.

We tried and tried and finally conceded that we had to call the doctor. Luckily, the company doctor was in the invited audience. He came backstage at the intermission, and we spent most of the intermission digging out (yes, digging – it felt like we were in some medieval battlefield) what we could of the giant splinter. Finally, he gave up saying that he was simply causing me pain at this point and told me that my body would push the rest out over the next couple of days. After I assured everyone that I was ok, they left me to have 30 seconds alone before I had to run out to the stage to sing my second aria.

The rest of the dress rehearsal became about my knee. I do a lot of kneeling in this show – it almost became a game to see how I could find a substitute position for kneeling and still be grounded enough to sing. I honestly have no idea how the show went as a result. I am told that it was a good run off the show and that we had made strides since the last rehearsal. The audience seemed to enjoy it.

After the rehearsal, I had a beer with the cast and crew and gave a mini interview to one of the radio journalists who was in the invited audience. Unfortunately, the interview was in French, so I am positive that I made an ass of myself. The of the interview came when he asked me how old I was and I responded that I was 18 not understanding why that caused everyone in the room to laugh.

Today, still feeling like there was a substantial amount of wood left in my knee, I went back to the doctor with the artist liason, , in tow in order to make sure that the doctor and I could understand each other. He concurred with me about the amount of wood still in my knee and got an anesthetic, a razor-like object, and some tweezers so that he could dig out the remainder. Alice (who has been my guardian angel throughout this whole process) tried to make conversation with me in order to distract me from the mini-surgery going on in my knee and midway through us talking about my lodgings here in , the doctor said, “Voilà,” and held up a fairly thick, centimeter-long sliver of the stage floor.

I breathed a sigh of relief, looked at , and said, “This is most definitely going in the blog.”

Pavarotti always picked up a bent nail from backstage for luck. Maybe picking up a sliver of the stage before you sing will bring you luck! (But preferably carry it outside your body.)