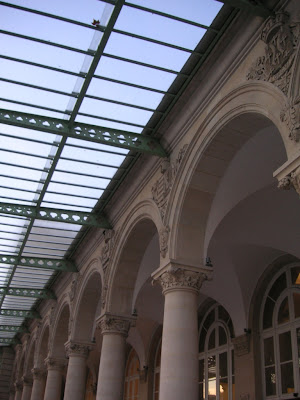 After practically everyone at the Houston Grand Opera catching what we are lovingly referring to as “the plague” over the last three weeks, the miraculous happened at our final dress rehearsal of Entführung Tuesday evening – everyone sang.

It was so nice to have everyone back on stage and in full voice after so many absences due to illness. Somehow, singing the quartet at the end of Act II (one of my most favorite operatic ensembles ever written) is not the same experience when it is only being sung by two people. Elise, our superhero assistant director, stepped in for practically every character at some point last week. The most amazing thing was that Elise knew practically every bit of the German dialogue by heart and was able to lipsync in all the ensembles – it was like watching a one-man version of The Abduction from the Seraglio.

This, just like any good working experience, has been a really great journey. Pedrillo, while he doesn’t present the vocal challenges that Lindoro does, is dramatically one of the most challenging characters I have come across in a while. Comedy is difficult in that it requires virtuosic specificity in terms of dramatic beats and timing while still being able to stay in the moment. I’ve learned a lot over the past couple of weeks, and I am really starting to have fun getting to step into Pedrillo’s shoes for each rehearsal.

When I was in the Studio here not so long ago, it was stressed to us repeatedly that we needed to show up properly prepared for the first day of rehearsal, for a variety of reasons. What I’ve come to realize over the past couple of weeks is that I mistook “prepared” for “perfection”, which resulted in a lot of impatience and frustration with myself early on in the rehearsal process here as I tried to learn to do things like make a martini and sing in rhythm at the same time. Luckily, hearing Elise repeat to me over and over, “this is what rehearsal is for” helped me figure that out.

To my wonderful and incredible colleagues, toi, toi, toi for a fantastic and fun opening tomorrow and thanks for such a great time these past few weeks.

Good luck with the opening!!!