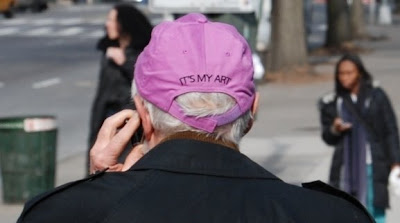 It has been almost three weeks since my last confession. I mean, entry.

Traipsing through my former stomping grounds as a student and young artist the past couple of months, I have been forced to confront many artistic demons. Just like any person who dreams, I encountered some rather hurtful and harsh criticisms along with the valuable nuggets of wisdom that I gleaned during my studies, and while I had the luxury of revisiting some of what inspired me, I also revisited some of those the moments that dampened my artistic hopes at various times. Those discouraging moments quickly became many of the choice insecurities that are magnified by my inner critic/censor, that oh-so-tiny voice inside one’s head that can manage to ring loud enough to induce a flood of such depression and hopelessness that it can deafen one artistically. Normally, I can drown out that critical voice with a voice of positivity and hope so that it recedes into nothingness for the day, and so I can find the courage to take a few artistic steps forward. It is more difficult to wrestle that oh-so-tiny voice into submission when one is standing in the very rooms where the comments that have become the critic’s fodder originated or when one is standing face-to-face with one of the people who came up with one of those choice pearls of so-called wisdom. Dealing with that kind of internal negativity and hopelessness has been overwhelming despite all of the inspiration and nostalgia that came along with the experiences of being in those places.

About a year ago, I was on a break from rehearsal at Chicago Opera Theater, doing some work on The Artist’s Way, when a colleague peeked over my shoulder and asked what I was reading. I explained how it was a kind of 12-step program for artists with the goal of unblocking creativity, and he asked me if I actually thought that singing was a creative profession and if I believed that singers were actually artists. As we debated, (because, of course, I do believe both of those things to be true) he pointed out that it is really the work of the composers that is creative and that all we do is regurgitate their creations and then bow to the whims of the director or the conductor. I debated that our artform is a collaborative one – the composer, conductor, director all need us to realize their part of a vision, but we also are the ones who bring to it our hearts and minds, therefore infusing it with our own person. That is why performances of the same song or role by various singers vary so much from performer to performer. It is the singer who creates the live moment, the performance. Regardless, this mini-debate pointed out to me how much we are talked at and told what to do as singers.

We go to school and conservatory where we learn (if we are lucky) the beginnings of how to master our voice, how to pronounce and possibly speak various languages, music theory, music history, how to act, how to be on stage among so many other things. Then, as American-trained singers, we battle viciously to get into various young artist programs where we are told what to sing, what to wear, how to behave, how to sing, how to market ourselves, how to format our resumé. There is a tricky aspect to learning through this process, because while so much valuable information can be gleaned, nowhere is it taught how to think for one’s self – that is a lesson that is our responsibility for us to learn on our own, and in many ways, it has to be that way. After all, no one but you can teach you how to think for yourself. I think that those who do figure that lesson out are the ones who bear the mark of a true artist.

As my mind clears and my artist clears the block of negativity and fear that has clogged the flow of my creativity, a slowly widening ray of light is shining into my heart, and it is making me realize that the words of my inner critic are just limiting factors that hold me back from achieving my dreams. Thinking for myself means that I have to be able to truly and completely let go of the comments that don't ring true to me or that spread a wet blanket over my dreams. The more that I allow my inner critic, my mind's chief representative for what other people think, dictate my decisions and restrict the choices I make, the less risk I'll take and the less my work will flourish. The shadow that it casts is even preventing me from seeing all the dreams that have already come to fruition, and what use is it achieving your dreams if you can’t even enjoy them once they are realized?

there's a lot to be said here in all honesty. i think u're colleague is a bit of a wanker [just from the few facts provided] but any judgment of that sort aside, i couldn't disagree with those thoughts more.

as an artist there is a great deal of training that is necessary and must occur. one needs a foundation based on and an understanding of the basic principles of music in order to go beyond mere regurgitation and reach creative levels. once u learn the groundwork u are able to build and move in what is your direction, create your style, define yourself as an artist.

the only true experience i have the comes close to illustrating this point comes from back in high school when i used to live in the darkroom after school. i'd always go to Rob to show him my prints, seeking his approval or advice on how to get it right (i.e., get his approval). after many, many hours down there over an extended period of time i came to him to ask his thoughts on a print and he simply told me u don't need to come to me anymore. it was absolutely terrifying: how was i to know if the print was any good, if i needed to decrease or increase times, dodge this or burn that when i no longer went to Rob? but i realized slowly that i had learned the groundwork and was at a point where i could determine what was necessary. more importantly, i was free to interpret the basic rules of printing photos to the way i saw fit: i could intentionally ignore or adhere to the common knowledge to create whatever effect i wanted. without first going thru simple repetition and doing as i was told and following all the rules without much free or independent thought, there's no way i could understand all of that and use it to create an expression of who i am, as an individual and as an artist.

but my photo skills are way out of practice now. on a side note, part of what you have gone thru and experienced relates as much to making a career out of being an artist as to any claim that singers simply stand up there and do as they're told [as if it were some beauty contest or dog show]. with your art being your work there are certain times where u will have to focus on the desires of others and attempt to fit what they are looking for or need. obviously i would never say u are comprising yourself or your artistic integrity [you are no sellout to use the familiar term] because u bring who you are and your vocal abilities, talents, and stylings to each audition. but often i'm sure working may restrict your independence in certain ways, yet u learn from the different ways ppl think of things which allows for greater creativity later.

anywho, sorry for the long comment...u definitely are an artist and a creative one to boot.

I've seen a lot of singers giving good, intelligent, sensitive performances that successfully convey the composer's work--and that's a wonderful thing, whether you want to call it primarily art or craft. And then there are a few singers who transform the part, who astonish and move me, who change the way I will hear the music (and so, in a sense, change me) forever. It's been something like two years since I saw your performance of Damon in Acis and Galatea, and the tenderness and radiance that suffused it are still fresh in my mind. If that's not the mark of an artist, what is?

hi nick, wow, sometimes i am amazed at how often your blog reflects what i have been going through/thinking about around the time of the posts. are you sure we are not distantly related?

this post really inspired me, as i have been going through a creative block of my own lately. it is just good to know that i am not alone and that everyone goes through those things. i got "the complete artist's way" in the mail last week, so i will be getting back into my morning pages, etc...i am sure it will help.

hope your concert in chicago kicks butt this weekend, and please say hello to ms. brandes and karla from me.