“I think the effect of America was to broaden one, encourage one and to shake one. I was in danger of becoming parochial, and this worried me. One reason I didn’t set English in America, though, was that I became discontented with the contemporary setting of English. It was necessary for me to get away from setting English for a time. I felt bolder with another language, or no language at all.”
-Benjamin Britten 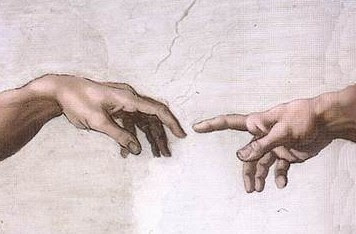 Arguably, the most challenging set on our upcoming recitals is the Seven Sonnets of Michelangelo. The music is harmonically complex and intricate, and the vocal lines require all the technical virtuosity of any bel canto cavatina – super-seamless legato lines, an ability to float long, high phrases, the flexibility to be able to jump smoothly from the top to the bottom of the staff. But the greatest challenge these pieces pose is Michelangelo’s poetry itself. Trying to understand 550 year old Italian is the first hurdle to jump when trying to make sense of Britten's compositional choices and instructions.

When most people think of Michelangelo, they often will think first of his gargantuan, masterpiece of the naked male form, David, or of the iconic image of God reaching out to Adam that he painted on the ceiling of the Sistine Chapel. At a party this summer, I was chatting with a woman who taught art history at one of the colleges in New York. When I mentioned these settings of his sonnets, she exclaimed, “Oh my! I’ve been teaching about Michelangelo’s art all of these years, and I never even realized he wrote any poetry!” More famous as an architect, painter, and sculptor, his poetic achievements often fall by the wayside when considering his artistic output.

One of the challenges Michelangelo’s poetry poses is its philosophical nature. Rather than celebrate landscapes or create stories about fictional people, his poetry is a written philosophical meditation on the events of his life. Michelangelo didn’t start composing poems until after his completion of David in 1503-1504, and while he wrote intermittently for the next 25 years, his most productive period as a poet did not start until 1532, when he was 57 years old. It was in this year that he met a young man named Tommaso de’ Cavalieri. Michelangelo became infatuated with the much younger Cavalieri (Cavalieri was only 23 years old at the time), writing around 50 poems for and to him, musing on the nature of his love for him and struggling to remain within the bounds of propriety while doing so. While it is pretty evident that Cavalieri didn’t requite Michelangelo’s passion, he remained one of the artist’s closest and devoted friends throughout his life - he was one of two people at the artist's beside when died in Rome in 1564. The poems to Cavalieri literally burst at the seams with the intensity of Michelangelo’s passion for the young aristocrat. Most of the poems in Britten’s Seven Sonnets of Michelangelo come from these sonnets to Cavalieri, creating an aural snapshot of the most intense period of their long, close, and tumultuous friendship.

Britten composed his settings of Michelangelo's sonnets in Amityville, New York in 1940, during his sojourn in America at the beginning of World War II. Of the seven sonnets that Britten chose to set in this first song cycle that he wrote for Peter Pears, six are poems that Michelangelo wrote expressly for Cavalieri. The final sonnet of the cycle (which is actually the earliest poem and is the only one not for Cavalieri, dating from right before Michelangelo met him circa 1530), with it’s images of love “holding him captive” and beauty “binding him fast”, anticipates many of the themes that occur in much of his artwork for Cavalieri. At the end of the second sonnet of the cycle, “A che più debb’io mai…”, Michelangelo revisits this theme, bluntly naming the cause of these passions by making a bit of a pun on Cavalieri’s name:

“If to be happy, I must be conquered and bound,

it is no marvel that I, nude and alone,

remain the prisoner of an armed cavalier.” 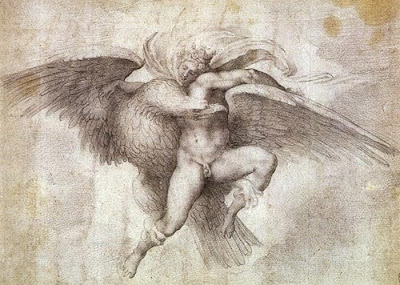 One of the prevalent themes in Britten’s music is the plight of the outsider. Many of the main characters in his operas are outsiders of one sort or another: Peter Grimes, Albert Herring, and Aschenbach in Death in Venice are just a few examples. In these poems, Michelangelo is the outsider – he desperately wants to get into the heart of Cavalieri the way Cavalieri has pierced his own. In the fourth sonnet of Britten’s cycle, “Tu sa’ ch’io so’…”, Michelangelo pleads for Cavalieri to stop keeping him at bay and to break down the barriers he holds up against him. Britten writes awkward octave leaps, and syncopated rhythms, setting the text about breaking down the wall on high g-sharps and a's, in an intense and loud tessitura.

“Why ever do we hesitate to greet each other?

If it is true, the hope that you give me,

If it is true, the good desire that comes over me,

Let us break down the wall between one and the other

For hidden sorrows have double power.” 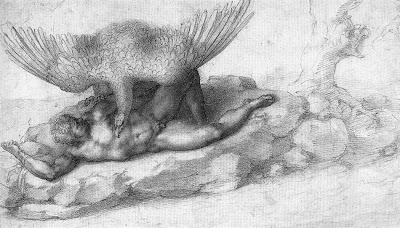 The Punishment of Tityus - Michelangelo's drawing for Cavalieri, 1532

Disarmingly sweet, loving, passionate, tortured, angry, hurt, helpless, vulnerable, pleading, Michelangelo’s sonnets to Cavalieri paint with words the frustrations and pain of being consumed by a passion that is not returned in kind. The experience of feeling unrequited love has remained little changed in the past 550 years.

“…I enjoyed setting them all. The Rimbaud and the Michelangelo cycles were necessary for me to shed the bad influences of the Royal College. With both the French and the Italian I was perhaps responding to Nietzsche’s call to ‘mediterraneanize music’. The Italian songs have predominantly sunny lines. I am sure Purcell felt the same way in his own day about this, for surely he was influenced by French and Italian music too. As the technical question of setting a foreign language, I am not a linguist…but I pride myself that I have a feeling for languages, even if I don’t speak them very well.”