Sex and the Roman City 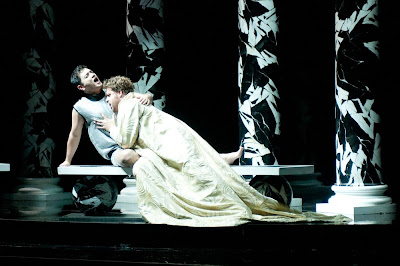 Lucano and Nerone in Florence - photo by Ruth Miriam Carmeli

After spending much of the Spring singing liturgical mass settings and bible stories, my trip to Florence in June was a sudden flip to the dark side. Monteverdi’s L’incoronazione di Poppea is filled with attempted murder, twisted political intrigue, infidelity, complicated love triangles (or perhaps parallelograms?) and people cross-dressing left and right. The best part is, while the events of the story are adapted fairly liberally, they’re based on true stories and human history. Much like watching the HBO series Rome, you get a glimpse of just how much and just how little humanity has changed over time – then we had Arnalta dressing up as Poppea in his/her final scena, and soldiers gossiping and complaining about Nero and Poppea’s love affair and it’s effect on the state at the beginning of the opera. Now we have RuPaul’s Drag Race and Bill Maher and Jane Lynch reading Anthony Weiner’s sex-tweets on HBO (link probably NSFW...).

One of the characters that I portrayed in Florence was Lucan, the famous poet and close friend of Nero at the time that the opera takes place. While many different stagings of this famous scene between Lucan and Nero exist, many directors seize upon the fact that Nero was famously bisexual as well as the passionate, sensual nature of the music, and commonly stage it as a big, gay love scene between the two characters. It is a bit of a controversial decision to decide to stage the scene explicitly as a homosexual love scene, and I found myself wondering as we rehearsed how the scene might have been staged in Monteverdi’s time. In the end, I also found myself realizing that unless someone invents a time-travel device in my lifetime, we’ll never really know. If you’re interested in the academic debate about the scena, you can read some more scholarly thoughts on it in this little article I stumbled across on a late night wander through the ether here.

Regardless of other people’s opinions, I feel that a very strong argument for a highly sexualized staging can be found in the music. Whatever Monteverdi intended, his intention was sexual and there is an intense climax involved – once Lucano starts singing “Bocca, bocca…”, a ground-bass ostinato begins in a meter that is a slowly rocking three. The note values that Lucan sings gradually get faster and faster while Nero sings “ahi” repeatedly, each iteration of “ahi!” getting higher and higher until they finally climax together, with Nero singing his final “ahi!” on a high G. It’s pretty sexy music – some of the sexiest music in the entire opera, as a matter of fact. There’s even a little bit of afterglow after, as Lucano sings languidly of Nero drifting off into “the ecstasy of delightful love” after the big climax. We should all be so lucky to have sex as good as this music.

You can hear one interpretation of the scene here (although in this production, Nerone is played by a mezzo whereas in ours it was played by a tenor)

The sexy "bocca, bocca" business starts around 3:06. This version truncates the afterglow moment - you can watch the complete scene here (which was not embeddable...).

While I have done the role before, this was definitely the most sexualized staging I have ever performed – in fact, it was the raciest staging I’ve ever performed in any opera, anywhere, ever. It found Nero and I fondling and passionately caressing each other throughout the entire duet. During the “bocca, bocca..” section I referred to above, I dry humped Nero as I sang, my hands exploring his body as he grabbed my hips, pulling me in closer and harder with each thrust. As we approached the musical climax, my hand made its way to his groin, and it was explicitly clear to all that I had finished him off with my hand as he came, wailing away on his high G.

(Do I need to label this post NSFW? Did Danielle Steele just invade my body?)

Anyway, as we rehearsed the scene last month, I found myself gaining a newfound respect for actors who do love scenes frequently both on screen and on stage. While I have had to kiss many a woman (and a man or two as well along the way) in various productions, I’ve never actually had to simulate quite this level of sexual activity on stage, under a spotlight, before. It really requires a lot of selflessness and letting go of inhibitions to do an act that feels so private in public. In front of an entire production team, stage crew, and cast of colleagues, that can be quite intimidating. In rehearsals of the scene, I would find myself thinking, “Is this right? Should my hand really be going here now? Am I making him feel uncomfortable? Is it ok that I am humping him like this right now – or is it too much? I’m closing my eyes as I hump – does that look ridiculous? Am I allowed to sing with my eyes closed?” And yes, my parents were at the opening night performance.

Thankfully, I was singing as I did all of this, and the concentration that all this multi-tasking required left no choice but to push past the boundaries of my inhibitions and keep plowing forward, so to speak. I was incredibly lucky to have the most wonderful colleague as Nero, who (despite being a happily married father of two adorable-looking young children, judging from the pictures he showed me) was entirely comfortable jumping right in and seemingly had fewer inhibitions than I did. His ease made finding my own pseudo-comfort with it all easier and made it all that much simpler to just get right down to business.

In the past, I actually haven’t have quite so many inhibitions about kissing someone or doing a love scene with someone on stage, but (despite the fact that this pushed boundaries further than I’ve gone in the past) that is mainly because my scene partner is normally a woman. Normally, in those situations, it’s very clear that I am working – it’s very easy to maintain that separation between what’s real and what’s pretend. Since it’s very clearly “acting”, the awkwardness of doing these things with a colleague melts away easily. Add to that, I know it’s socially acceptable to be sexual and loving with a woman, making me feel even more comfortable doing such things in public. Inhibitions aren’t so much of an issue, and therefore it’s easier to commit to my choices and follow through with conviction. This time, it felt different. Because it was a man that I was grinding against and kissing, I was in a situation that touched something much more real in me – something much more private, much more vulnerable.

On the one hand, that vulnerability felt terrifying. On the other, it felt amazing to stretch to a new level of honesty in performance. The combinations of fear and the newfound senses of freedom, daring, and accomplishment were exhilarating.

Oddly enough, at the end of the day, I find it harder to play gay than to play straight.

Fascinated to read your thoughts on the Monteverdi, Nick.

I am just an admirer of the music; I can't sing to save my life. You brought up an intriguing point about the acting aspects of these roles and the challenges which one might experience.

It's a side to performing which I, as merely a fan, take for granted; and I was thrilled to read your take on it.