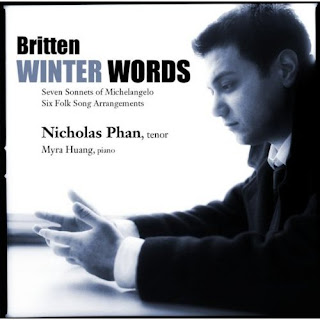 You’ve probably noticed the ad for my debut solo album on Avie at the top right corner of the blog for the last month or so…the album was released digitally this week (the physical release was a little earlier this month), so I feel it behooves me to post about it for a moment. Both Myra and I are really excited about the album, as it represents not only what was an incredibly important step in our preparation for our Carnegie Hall debut recital last fall, but also the beginning of a new exciting artistic chapter for us.

Since the album’s release, the most commonly asked question has been “Why Britten?”  The main reason I was drawn to Britten was that over the past few years, between various recitalings and my summers exploring vocal chamber music at Marlboro, I've become increasingly amazed by the power of Britten.  I wrote a bit about my first outing of Winter Words in a small, Midwestern town in the album’s liner notes, and how I was so surprised by the positive impact it had on the audience there.  I learned many valuable lessons from that concert about never underestimating an audience, and how emotionally moving Britten’s music is.  Since that concert, I feel as if I have become a missionary for his music, proselytizing to anyone who will listen.

Back when Myra and I were given the opportunity to perform a debut recital in Carnegie Hall, the big question was: what music do we sing?  Almost immediately, my obsession with Britten and his music took over, and the next thing we knew, we had an entire program that was mostly comprised of his music.  As we dug deeper into these pieces during our rehearsals, we felt that we simply had to record it.  In the process of learning about Britten these past couple of years, we have inevitably become fascinated with other pieces of his music, and are excited to explore more of it in the recording studio as we put together the next album!

You can purchase the album on iTunes here, and (if you are an old-fashioned CD collector, like me) you can order physical copies of the album at Amazon.com here.

We hope you enjoy!