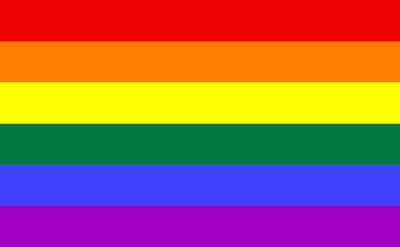 Today is National Coming Out Day.

Oddly enough, my mind has been on the subject of coming out a lot lately. One of the ways I’ve had of occupying my alone time here in has been to watch various coming out/gay storylines from a couple of British and American soaps on YouTube (cheesy, I know, but it passes the time). Frankly, I wish in some ways that my coming out had occurred a bit more like those storylines – beautiful guys coming out to parents who quickly deal with their issues about homosexuality and reassure them that they love them no matter what, and then finding beautiful boyfriends shortly thereafter, sometimes helping them come out in their own turn. Not that my own story is so awful…I was just chubby with a waistline that was 5 or 6 inches bigger and there were no potential boyfriends (beautiful or not) in sight. Still, I had so much to be grateful for.

I came out in 1995, when I was 16 years old. Early in the year, I confided my attraction to members of the same sex to my good friend Emily during our free period, because I just couldn’t bear to keep it a secret any longer. She kept my secret for me and was the first positive influence I had in regards to my sexuality. Later that summer, I came out to the rest of the world. While at Interlochen, I met a fellow camper who I had a crush on. When I realized that he was openly gay, I found the courage to come out fully myself.

When I arrived back at school in the fall, I found that it had actually earned me a bit of respect, much to my surprise. I think it was a combination of being lucky enough to be in a liberally minded environment where bigotry of any kind was not tolerated and the newfound confidence and happiness I found in just being honest about myself. The friends that I made and became close with that year have become like extended family to me. It was the first time that I had a group of friends in my life, actually.

When I was in college, I worked up the courage to come out to my parents, which was not the most pleasant experience. They had a really hard time with it – they mostly felt betrayed and lied to, I think. I think it hurt them deeply that they were among the last people to find out. The night I came out to them was one of the scariest I’ve ever had to endure, but even then, I had those same friends out in the car, waiting in the sub-zero weather to make sure that I was ok. I wasn’t ok that night, and they took me back to my apartment after the fighting with my parents became too much to bear, and they tried to comfort me and support me in my time of need. I’ll never forget my friend saying to me that they thought I was perfect exactly as I was and that they loved me no matter what. Never had I needed to hear those words more.

Over time, my relationship with my parents has improved, and while it is still an awkward subject for us, I am able to communicate with them honestly, allowing us to have any sort of relationship at all – one that heals and grows each day.

Thinking back on coming out, I realize it is a process that is never fully finished. I will continue coming out to various people everyday for the rest of my life – there are always situations I encounter where I wonder if people know. It takes courage, and I am shocked when I realize that sometimes I am still afraid. Then I think back on those earlier years, and I see that there has always been someone there for me to support me, hold my hand, and to tell me it’s ok. I hope and wish that other people are able realize the same thing as they struggle with their journey out of the closet.

Here's a great contribution from two lesbian women to commemorate the National Coming Out Day :
Coming Out in an Evangelical Church - Wow!

You can also go directly to FaithoftheAbomination.com. Their story will be told in a documentary film. I feel this will be groundbreaking for the GLBT community.

I knew when you were three! Those daycare cabaret acts were a dead giveaway :) I admired your talent then and still do after all these years. The beauty within is not defined by your sexuality. You are gay, but you are so many other things too. You are who you are because of all those things. I'm so sorry you are lonely, but, as you said, you are very lucky to have so many people who love you a great deal.
Parents always envision a perfect life for their children. What is part of that perfect life, in their minds, may not be what is the perfect life for YOU. I know they love you and are so very proud of you.