This season't theme of mythology reared its head again yesterday, as I started my first rehearsals for this weekend's Oedipus Rex with Cal Performances in Berkeley this weekend.  yesterday's meeting was a chance to check in with Esa-Pekka Salonen's wonderful assistant for this project and begin to get an idea of his structural ideas for the piece (the Philharmonia Orchestra is still on a concert tour through more southern parts of California working their way North until Friday).

This Sunday will be my maiden voyage in the sandals of Stravinsky's Oedipus.  The piece is a central pillar of his neo-classical period, a chapter in his compositional history with which I am strangely and randomly well-acquainted, having performed his Pulcinella, Mavra, Canticum Sacrum, and Cantata many times over the years (as well has having studied and salivated over The Rake's Progress since I was a college student). So, while it is the first time I will be sailing these particular waters, there is something that feels quite familiar about essaying the musical journey that Oedipus takes as he discovers the horrifying truth of his origins and stabs his eyes out. 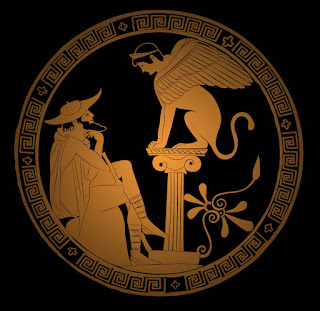 Funnily enough - this weekend's Stravinsky debut has a little connection with what I consider to be my professional debut.  I initially met the current Artistic and Executive Director of Cal Performances, Matias Tarnopolsky, while he was still working at the Chicago Symphony Orchestra back in 2002.  Matias was part of the team that generously hired me for my first major professional assignment: to sing Iopas in Berlioz Les Troyens with Zubin Mehta and the CSO.  Still a master's student at the Manhattan School of Music, I remember being so young and fearless that when I was called to audition for the role, I didn't hesitate to learn Iopas' challenging aria in a matter of days for the audition, because my enthusiasm for how beautiful the music overpowered any sense of nerves or doubt I might have had about such a vocally difficult piece of music.

After landing in Chicago a few months after that audition to rehearse and perform the role, I decided that since it was my very first adult, big time engagement, I needed to wear a proper bow tie with my tails for the performances, as opposed to the clip-on, pre-tied white tie that I had used throughout college when I needed to wear tails.  It was the first time I had ever considered wearing a proper bow-tie, and once I had returned to my hotel room with my fancy, new purchase, I realized that I had absolutely no idea how to tie it.  In a panic, I went to the nearest men's store to find a guide on how to tie a bow tie and was advised by the kind salesperson there that I should not fret, it was just like tying a shoe.  Easy.

Fast forward to a few hours later, when I am in my dressing room frantically trying to tie my tie, and the concert has already started.  As my first entrance approached, I was still struggling with the cursed pique monstrosity, when Matias knocked on my door to let me know that I needed to go to the stage.  I looked at him helplessly and sheepishly admitted that I had absolutely no idea how to tie a bow tie.  He calmly turned me around, tied my tie for me from behind, and then pushed me on stage.  Teaching a young musician how to tie their bow tie was not something I would have imagined to be on the list of duties of an artistic planning director of the Chicago Symphony, but this is how I learned how to properly deal with that particular piece of men's formalwear.  Ever since, whenever I am wearing white tie and tails, there is always a moment when I smile to myself, thinking of Matias and that nerve-wracking experience.

While I won't be wearing my white tie and tails for this weekend's performance of the Stravinsky (it's on a Sunday, and we are in suits), it is wonderful to reconnect with Matias again for an important debut of music that I am extraordinarily enthusiastic about, and I'm grateful to him for yet another milestone opportunity.