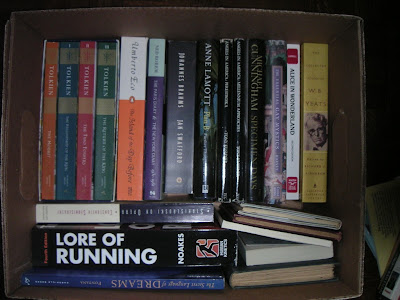 We will be homeless nomads as of a week from Monday. My life lately has exclusively involved boxes, packing peanuts, packing tape, scissors, planes, hotels, and frantically trying to memorize loads of music for the past three weeks. To say I’ve been overwhelmed is an understatement. There is an exciting element to it all, though. The world is our oyster...

The question that I have been asked most frequently in the past two weeks is: “Where are you moving to?” The short answer is: We still don’t know. The long answer: well…long story made short – we’ll know soon. 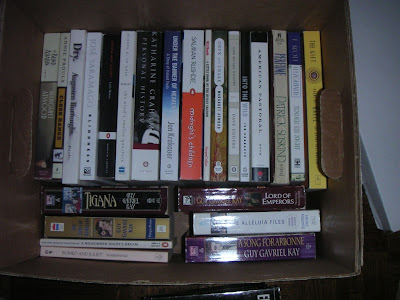 In the meantime, packing always involves stumbling upon things forgotten as well as the occasional newfound “treasure”. I found out that my boyfriend had "accidentally" purchased two books with horrifying gay animation on the covers – one called Bite Club and another called Hot Sauce. I judged each book by its cover (and titles) and decreed that they were to go to goodwill. Another choice book that I discovered has the title There’s Nothing Wrong With You – obviously one that I should sit down and read as soon as we find a new home and unpack. Among the other fun discoveries were a bottle of Root Beer Schnapps (who drinks that?) and a tape of a Christmas concert I sang in when I was 17 years old…nothing like a trip down memory lane in stereo.

Note: if you look carefully at the pictures above, you will discover that one of my guilty pleasures is reading sci-fi novels (those, unfortunately, are not Jeremy’s contribution to our library). It’s something that I’ve hidden for years – to admit it here so publicly takes a lot. I feel like I am coming out for a second time, in a way.
Posted by nick at 12:10 AM

Welcome back. I missed your blog, but I guess being cast out into the unknown is enough of an excuse for anyone.

And congratulations on joining sci-fi anonymous. Our numbers are legion. The publisher I work for does a lot (although more fantasy than hard sci-fi), and I have come to really enjoy it. Sometimes you can say more when you're not bound by the constraints of reality. I worked on an interesting book recently called SINGER IN THE SNOW. The setting is a world with very long, bitter winters, and the only way to capture and hold enough heat to survive is through a particular kind of disciplined singing. (The author is a musician, and knew what she was talking about). It gives quite a vivid perspective on the issue of whether music really matters, when the answer to the question, "Why is it important whether or not I give my best to my performance?" is so directly, "If you don't, civilization will die out in the cold of night." (The book's not as sappy as this sounds. It's actually rather fun.)

Thank you, Janet - it's nice to know that I am not alone! They say that there's safety in numbers.

My dearest- Good luck with your move to wherever land. Knowing that you read sci-fi makes me love you even more...and I didn't even think that was possible! MWAH!

You may or may not know this already, but I LOVE sci-fi novels (also tv shows--SG1, anyone?) Have been addicted to them since at least high school. And yeah, I used to watch Buffy in secret, so I feel your pain. Meanwhile, I have 50+ Star Trek novels in my attic, a slew of Isaac Asimov novels, Alan Dean Foster and many others on multiple shelves scattered throughout the apartment. Eep. I may have gone slightly overboard!

Having said that I found a new series, good stuff: Jumper by Steven Gould. Check it out.